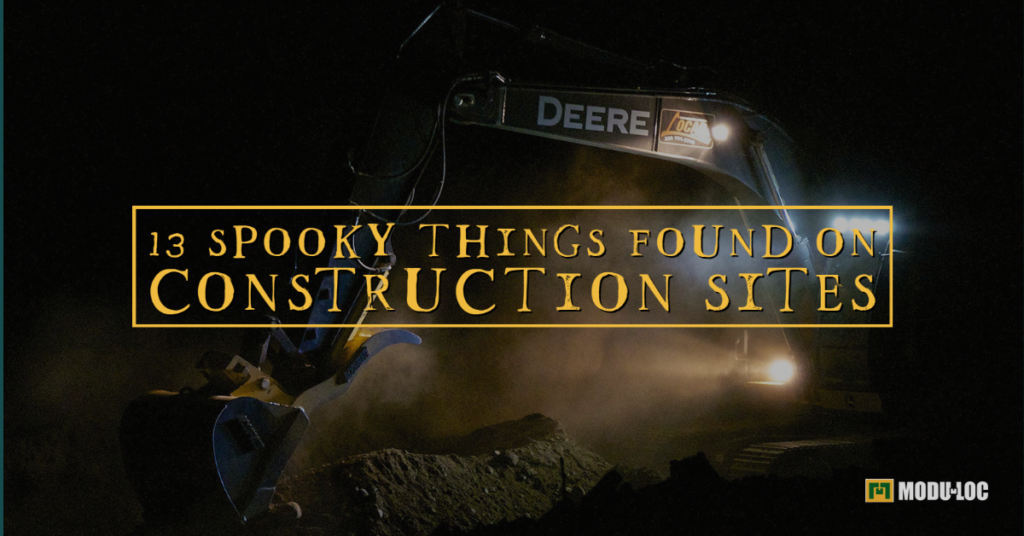 Editor’s Note: Given the popularity of our original 7 Spooky Things Found on Construction Sites post, we have updated this list to include 6 more eerie discoveries.

When a construction crew started to work on building a new Apple store in Madrid, they came across something they hadn’t anticipated when they developed the plans. Workers discovered the remnants of a hospital from the 1400’s that was used to treat victims of the plague. Many of those who visited this hospital never made it out, as many people died of the illness. The hospital was closed and demolished in 1854, and hidden under the pavement of a public square.  It wasn’t until they broke ground on the soon-to-be Apple Store when they discovered what remained of the building.

Crews were working on a construction site in Missouri when one of the trucks came to a halt while digging up an area. Upon investigating why the truck was stalled, they discovered what seemed to be a human leg bone. Startled by this discovery, they put the job on hold and called the authorities. Crime scene units and cadaver dogs were brought in, and a human skull was also found.  The medical examiner’s office said the bones were very old, and it would take some time to examine them. Unfortunately, construction had to be stopped during the investigation. Talk about a “Dead-End”!

On a construction site being developed for new condominiums, workers found multiple headstones beneath the ground. During excavation, they found four headstones that had been broken into pieces and mixed in with other debris. Some of the pieces of stone had names that were plainly legible. The excavation team called the developers who owned the site, and discovered that this was once the location of a cemetery. However, there were no longer bodies buried there. Based on what was left of the tombstones, they were able to identify the individuals and confirm that the bodies had been moved to another cemetery.

The severed head of a 30-50 year old man was found in an active quarry in the United Kingdom. Police believed the victim was hit by a train about a decade earlier, and that the head may have been stuck in a nearby bridge. It is likely that when the structure was cleaned, the head became dislodged and ended up at the quarry. Police are still working to find out the identity of this individual.

A home renovation project was underway in San Francisco when contractors discovered a strange object under the garage. They had found the casket of a little girl, who was believed to have been buried 120 years ago. They decided to call her “Miranda”. Officials hypothesize that Miranda was left behind when a cemetery was relocated. The owner of the property wanted to bury Miranda in a cemetery, but the city would not issue a burial permit for Miranda without a death certificate. An organization called Garden of Innocence, which provides burials for unidentified children, took Miranda and laid her to rest. They hope to find out Miranda’s true identity in the future.

A construction crew in Brazil was blowing up a cave in preparation to work on a dam, when a 33 foot anaconda emerged from inside. It was claimed that this was the largest snake in history. Video footage of the encounter showed that the anaconda had died, so it was not possible to re-home it and further study the specimen. It’s unknown if the explosion killed the snake or if the workers killed it out of fear.

A $15M construction project in San Antonio was halted when workers discovered a very rare spider. The spider, known as a Braken Bat Cave Meshweaver, is an endangered, non-venomous species that lives in caves. It has no eyes and is almost completely translucent. This was only the second time this species had been found in more than 30 years. The project was green-lighted to continue again 2 years later, but only once the plans had been redesigned (to the tune of $44 million) to protect the spider’s cave habitat.

In the 1850s, a couple were renovating their home in Paris, France and discovered the mummified corpse of a baby when it fell out of the wall during demolition. A French physician named Louis François Étienne Bergeret performed an autopsy on the body, studying the patterns of necrophilious insects to determine that the infant had died several years earlier. This case made him one of the first forensic entomologists in history.

In 2011, Vincent Marcello had an archeologist dig up his backyard in New Orleans before construction began on his new pool. He took this extra precaution because he suspected he might find something morbid, given that his property sat on part of the city’s first burial grounds. Sure enough, they found 15 wooden coffins right where the pool was to be installed. The coffins were said to belong to the Saint Peter Cemetery in New Orleans. The bodies found in the coffins were transported to Louisiana State University to be studied and then carefully reburied.

The spookiest part of this story? Several coffins will (legally) remain, unearthed and undisturbed, beneath the finished swimming pool.

An average archaeological audit on a construction site led archeologists to the remains of a 2,000 year old Native American woman. The team of archeologists initially found some teeth, but it wasn’t until they discovered a toe that they realized the significance of their find.

The woman’s remains were found under a main road in Florida, and it was suspected that she was a member of the Tequesta tribe that had lived in the area a couple thousand years ago. Archeologists believe the woman died of a disease, based on the damage indicated by her remains.

When contractors in Manhattan began a $9-million project to install a water main near Washington Square Park, they knew they could be in for a frightening discovery. From 1797 through 1825, the area had served as a public burial site – prompting New York’s Department of Design and Construction to engage archaeologists from the earliest stages of the project. Sure enough, crews unearthed two crypts containing coffins and human bones thought to be approximately 200 years old!

According to one of the archaeologists tasked with investigating the site, the burial grounds might have belonged to one of two Presbyterian churches that used to occupy the area.

A contractor working on a vacant home in Poughkeepsie, New York stumbled upon a gruesome discovery. Hidden behind a false wall in the basement was the body of a woman, wrapped in a sheet and contained in a large plastic bin. The remains belonged to Joann Nichols, who at that time had been missing for 28 years! Though a thorough investigation had taken place when she was first reported missing, Joann was never found and her case had remained open since 1985.

An autopsy determined the cause of death to be blunt force trauma to the head. Given that Joann’s body was discovered in the home she had shared with her husband, he became a suspect in the murder investigation. Unfortunately, James Nichols had passed away before the discovery was made, so he will never stand trial for his wife’ murder.

In 2015, construction crews working on a property in Schuylkill County, Pennsylvania discovered human bones. The property had been rumoured to be a burial ground, and the local myth turned out to be true. Historians believe the site was a “potters’ grave” or mass grave for victims of the 1918 Spanish Influenza. Schuylkill County was hit particularly hard, with the death toll from Spanish Influenza reaching 1,600 people in just one month.

Though it isn’t all that common, sometimes you can find some…less-than-pleasant things while digging up the ground. It might be an interesting piece of history, or a fascinating species of wildlife. So next time you’re excavating on site, proceed with caution. You never know what you may find lurking beneath you. Muahahaha.

We have a number of different fencing options to choose from. The right choice for you may not be obvious. That's okay – our product recommendation tool can help. Simply answer a few quick questions and we can point you in the right direction.

Modu-Loc Fence Rentals and TOOLBX are announcing a new partnership that will allow Toronto builders to order temporary fencing via a mobile app. This is the first time that temporary fencing will be offered on TOOLBX, a procurement platform that connects Canadian contractors with construction suppliers. Through TOOLBX, builders can order and schedule delivery of […]

Pre-Galvanized vs. Hot-Dip Galvanized Steel: Which is Better?

In the temporary fence industry, galvanized steel is one of the most commonly used materials. You’ve probably seen silver-coloured galvanized fencing around your city, and if you’re in the construction business, chances are you’ve used it on a project. But did you know that there are different kinds of galvanized steel, and how it is […]

Should You Rent or Buy Your Fence?

You have a big construction project coming up. You’re coordinating all the materials, suppliers and labour to make sure the job gets done right. When you need temporary construction fence to secure your site, you may wonder if it is best to rent or buy your fence. There are many different factors to consider, but […]

We’re here to answer any questions you may have.

For a better browsing experience, select your country and language below.